Sue Margeson of the CSSA meets with the CFIB for a strategy sessions and a plan has been put in place to provide input to the government committee who will be reviewing the issue. Stay tuned for more ways which storage owners can assist to achieve our goal.

You may or may not be aware of the history (please see below)  and paths that your Association has taken with this initiative.

Way back in the 1960’s due to very high revenues  being received by developers of apartment and office buildings, the Federal Government created a new tax rule for the small business corporate tax exemption for businesses generating the majority of their revenue by the rental of “REAL” property.    The portion of this tax rule that affects the small independent self storage owners is where there is a requirement of a minimum of 5 full time, non-family member employees in order to qualify for the exemption.  At that time the independent  motel operators, who operate their businesses very similar to the way our independent self storage owners do, immediately sought after and received a full exemption to this rule and regardless of the number of full time employees are still to this day deemed as Active businesses.  We truly believe that had self storage been more prevalent at that time, we also could have become exempt with our similarities in operation and revenues.

So, now we fast forward to the past several years…

After doing some research we were able to find out that there had never been a self storage facility in Canada that was challenged under this tax rule.  That is, until a few years ago when the CSSA was approached by a Member is despair.  The British Columbia Member, was filing incorrectly, simply because he was not aware of the details of this tax rule and how it applies to very few industries in Canada.  This Member was challenged after a standard audit by CRA.  This Member was forced to pay hundreds of thousands of dollars in fines, taxes, and penalties and ended up not only having to sell his self storage business, but his family home as well to cover this debt to CRA.  When he contacted us for assistance and to make us aware that CRA is on somewhat of a “warpath” for “easy” revenue, he had just lost his second appeal of the CRA decision.  He had one more opportunity to appeal and asked for help.

Your Board of Directors discussed , researched and dug deep into the Member’s situation.  It was agreed upon unanimously by this Board that as an Association representing the Self Storage industry in Canada, we could not let this Member just give up.  This is a very important issue to the majority of those operating storage facilities across Canada.  It was apparent that it would be financially impossible for the small self storage operator to financially defend something like this in the future without possibly suffering the same fate as the current Member in B.C.  The CSSA and it’s Members are aware that this particular tax rule was never intended to affect any legitimate small business, however the reality is that it is affecting many across Canada in a negative way.

In 2013 the Canadian Self Storage Association formed the Active/Passive Tax Rule Initiative fundraising campaign as it was agreed that this would be the best way to move forward to assist with the third and final appeal of the B.C. Member’s case.  With an overwhelming show of financial support we were able to move forward with this commitment.

In September of 2014 some of the CSSA Directors along with several CSSA Members attended 2 days of court in Toronto at the highest tax court in Canada.  Unfortunately our Member was not successful in winning his case, as it truly came down to the question of how many full time employees he had.  However, with that said, it was the opinion of the Board and the Members that we have heard from that in the contents of the judge’s decision he did provide us with some good advice and a good understanding of what we are trying to accomplish.  There was no disputing that most self storage operators, no matter what their size, are in actual fact, businesses that are very active with their customers and more.

A new direction for this CSSA initiative!

Throughout this process several Members of the Association had contacted us about the Canadian Federation of Independent Business and how they exist and fight for all independent businesses in Canada.  So after the courts had handed down their decision on the individual case it was decided by this Board to approach the CFIB to see how they may be able to assist us.  As it turns out, the Active/Passive Tax Rule and it’s flaws were already on their radar as they were lobbying for another similar business, the Moblie Home Park owners of Canada.  They were excited about our contacting them as with our industry, they felt that they could gain great strength fighting this battle.

Immediately after our initial contact, they were already preparing documents, lobbying on Parliament Hill in Ottawa and educating the politicians of all parties.  When asked what the CFIB wants in return for their efforts on our behalf, they responded with numbers.  As the CFIB is a Membership driven organization it is very important that when speaking with key people and groups in Ottawa, they want to be able to go in representing as many “voters” as possible.  With that said, the CSSA was able to negotiate an extremely good Membership fee to join the CFIB for all current CSSA Members, with the commitment from our Association of a minimum of 200 CFIB Members.

And where are we now with this?

One of the many things that the CFIB is responsible for is submitting  proposals to the governments of recommendations of changes they would like to have made to various laws, rules and issues affecting independent businesses in Canada.   The CSSA received a copy of the final draft of submissions to be included in the next Canadian Federal Budget.  The fantastic news is the WE MADE IT!  The following is the excerpt taken from this submission for consideration to be included in the Federal Budget that was read on Tuesday April 21, 2015. 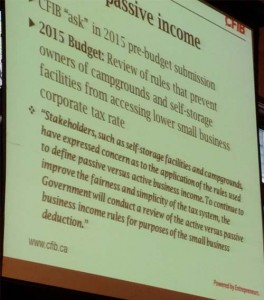 Excerpt from the 2015 Federal budget addressing self storage facilities

Small businesses that run self-storage facilities and campgrounds often operate active businesses from which they draw their principal income. Many also have employees. These business owners are denied access to small business tax incentives simply because they have chosen a specific type of business and have fewer than five employees. These types of tax rules are too simplistic and do not reflect the changing marketplace. CFIB suggests that these rules and tests be reviewed so that entrepreneurs in these types of active businesses are not denied the benefits provided to other types of small businesses.”

Now, here we are…on Tuesday April 21, 2015,  The Federal Minister of Finance, Mr. Joe Oliver presented his Federal Budget to Parliament in Ottawa.  We are so pleased to announce that we are a huge step closer to our Active/Passive Tax Rule exemption goal as WE MADE IT into the budget!  Although, this is not yet a done deal and the Federal Government has not given us the  (5 Employee) exemption that we are requesting, they did however commit to Review our request.  The following is exactly as this issue was presented in the Federal Budget….

“A review of passive income rules that prevent owners of campgrounds and self-storage facilities from accessing the lower small business corporate tax rate.”

Within days of the presentation of this budget, the government sent out a request to all involved for information, comments and considerations that they will use while reviewing our request.  The deadline to submit this information is August 31, 2015 and we will be communicating with you shortly on how you can help to achieve this terrific goal. 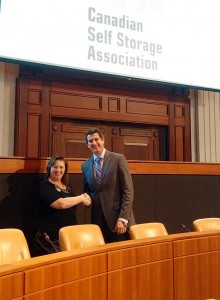 Sue Margeson, Executive Director of the CSSA, thanks Richard Truscott, Vice President of the CFIB, for his presentation at the 2015 Vancouver show

There is no way that the Self Storage industry would have gotten this far by April 2015 with this initiative had it not been for the Canadian Federation of Independent Business and the newly formed partnership with the CFIB and the Canadian Self Storage Association.  You are probably already aware of this partnership and its benefits to you as a Self Storage Operator in Canada.  If you have not already chosen to take advantage of this opportunity to enhance your business by signing up for your CFIB Membership, please do so today by contacting Sue at the CSSA office, 1-888-898-8538 or by email at info@cssa.ca.

One incentive provided to Canadian Controlled Private Corporations (CCPCs) is lower taxes on active income earned up to $500,000. As a result of the lower tax rate the CCPC is able to reinvest its earnings back into operations, thereby providing the ability to grow and expand. This incentive is known as the small business deduction, which lowers the taxes paid by BC resident CCPCs on active income up to $500,000 to 13.5%. Any active business income above $500,000 is taxed at 25%.

There is the ability to lower this tax rate through a mechanism called “refundable dividend tax on hand” (RDTOH). A portion of the tax collected at 44.7% is “credited” to the company in the form of RDTOH at 26 2/3%. The RDTOH is then refunded to the CCPC at the rate of 1/3 of the dividend paid when the company pays a dividend to the shareholder, who will then pay tax on the dividend personally. If the shareholder has very little other income, and if the dividend is less than $40,000, they may not pay any additional tax on the dividend. However even with full recovery of refundable tax and no personal tax the lowest possible rate on passive income in BC is 18%. In most cases, if the company is earning more than $40,000, the effective tax rate even after paying dividends will be much higher.

Sale of a Business

The difference in tax rates between the two types of income becomes very apparent when the assets of a company are sold and the sale includes buildings which have been depreciated. Since the value of those buildings has usually increased, all of the previous depreciation claims must be taxed in the year of sale. The rate of tax will depend on whether the original income was active or passive – the same rate will apply. If the high passive rate applies, the company will find itself paying a large tax bill, with much less cash left over to potentially reinvest in another business.

Finally, the company may be able to negotiate for the sale of the shares rather than the assets. If this is the case, shares of CCPCs carrying on an active business that are sold will likely qualify for the capital gains exemption, resulting in no taxes being payable on any gain up to $750,000 per shareholder. Shares of a CCPC carrying on a passive business will not qualify for the exemption.