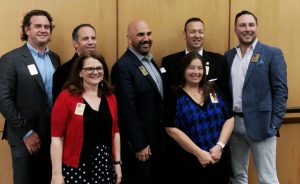 Troy has been an active part of the Canadian Self Storage Association since 2009, and directly involved with many initiatives affecting the industry across the country.  Troy has worked with Public Storage in Canada since 2002, and has been President and CEO since 2010.  Public Storage is among the largest operators in the country with facilities in many major markets across Canada.  Troy has a long history of real estate and development in Canada and has been educated in both business/commerce and employee relations management. Troy recently worked on the Lease Best Practices sub committee.

Sue is the founding Director of the Canadian Self Storage Association and has been on the Board of Directors in many capacities since 2004.  Sue has owned her storage facility since 1989 and still currently is involved in ownership now of a few facilities in Ontario and Alberta.  Upon creating the C.S.S.A. as we know it today, Sue realized that the self storage community in this vast country really needed to have a means of communication, obtaining good resources, a voice for advocacy and lobbying,  learning and sharing of information with others in the industry and these were some of the reasons why the CSSA was born!  Since 2004 Sue has been extremely involved in the planning and implementing of many CSSA programs, initiatives, events and more.  Sue really cares about the industry in Canada and the people in it and spends endless hours assisting others in self storage with anything that they require help with.  Sue created the motto of the CSSA and truly lives by it….T.E.A.M. (Together Everyone Achieves More).

Steven has, since August 2000, been the President and Chief Executive Officer of The Access Group of Companies focusing on the ownership, acquisition, development and management of self-storage, infill residential and commercial real estate in Canada.  The Access Group of Companies is comprised of: (i) Access Self Storage Inc. (ASSI) which is the third largest self-storage company in Canada with over 40 locations and over 2 million square feet; (ii) AMR Homes, which specializes in in-fill housing developments within the greater Toronto area; and (iii) Access Commercial, which holds and manages industrial, retail and commercial real estate.   He is also an independent director of Timbercreek Senior Mortgage Investment Corporation as well as an independent director of  HSBI Benefits Inc. (a private company).  Mr. Scott worked in public accounting prior to joining ASSI and is a chartered accountant having articled with Deloitte & Touche.  Mr. Scott holds a Bachelor of Commerce degree from Dalhousie University.

Robert Madsen grew up in self storage, having been introduced to it at the age of 5 when his parents bought their first conversion facility in downtown Vancouver.  Forty years later self storage continues to be his passion and livelihood as he operates his ‘small family business’ under the U-Lock Mini Storage brand, in British Columbia.  Operating, in communities big and small he loves the industry and all things storage.  He remains active in advocating for the industry and helping it evolve in productive and positive ways.  He’s currently President of the Vancouver Island Self Storage Association and a Director on the Canadian Self Storage Association.  He enjoys writing articles, presenting at conferences, sharing storage know-how and contributing as a moderator on the industries largest online self storage forum for owners, staff and vendors.  He values the importance of giving back as a Charter Member of the Rotary Club of Steveston and currently serves as their Public Relations Chair.  In his spare time, he loves spending time with family and friends while participating in new adventures and travel.

Tami is the President of Canadian Commercial Services Ltd.  which provides operations consulting for storage owners. She owns Burnaby Self Storage and Agassiz Store All, in British Columbia.  She holds a Bachelor of Commerce degree from Ryerson University. Tami is a very active and valuable member of the board since 2012, working on the Delinquency Management sub committee, the Lease Best Practices sub committee, helping with website matters and photography for the CSSA shows.

Chris serves as Managing Partner, CEO of the Real Storage Group which owns, manages, finances and develops self storage facilities.  The Real Storage Group currently owns and manages over 36 properties (+1.5 million sqft) in BC, AB, MB and ON and is actively growing.  Chris also serves as CFO of Wilmington Capital Management Inc., an investment holding company listed on the TSX, and is a board member of the Canadian Self Storage Association (having recently steered the Delinquency Management sub committee.
Previously Chris served as a manager in the dispute and valuation group of PricewaterhouseCoopers LLP and holds a Bachelor of Science from McGill University and a Masters of Management and Professional Accounting from the University of Toronto. Chris is also a Chartered Accountant and a Chartered Business Valuator.

David has been working in the self storage industry for 4.5 years and is responsible for Development, Acquisitions and Marketing at Apple Self Storage.  Apple Self Storage owns and operates 32 self storage facilities in Ontario and Atlantic Canada.  David currently serves on the Board of Directors; Executive Committee at Huron University College and has been a Senator-Young Leader Representative for the S.S.A.  David also volunteers as a Chef at Welcoming Arms Community drop in dinner.  David believes that all strong industries need a healthy and robust trade organization and association.